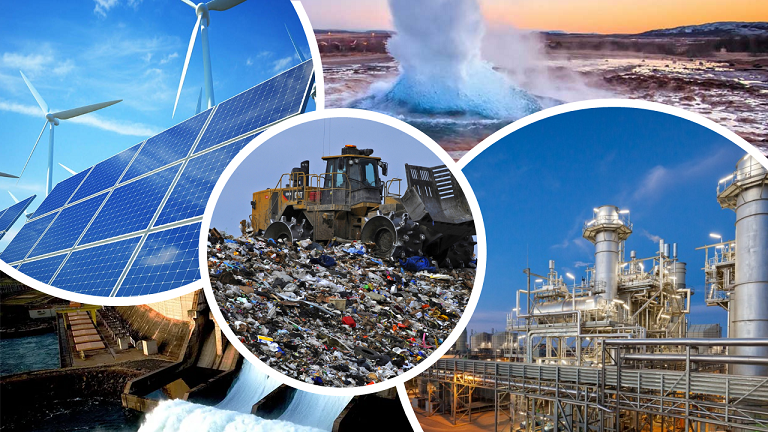 The main sources of renewable energy include Solar energy, wind energy and other sources of renewable energy such as geothermal energy.
Solar Energy
The Kingdom undertook and implemented integrated programs to develop solar energy based technologies to provide support for the industrial base of the country. The major solar energy conversion initiatives of the Kingdom are as follows:
KACST has been conducting major R&D activities in the field of solar energy on photovoltaic, solar thermal dishes, solar water heating, solar water pumping and desalination, solar hydrogen production and utilization, ultra-high concentration photo-voltaics (CPV) since late 1970s.
The Energy Research Institute (ERI) at KACST has conducted a number of international joint programs. The Renewable Energy Center of ERI is dedicated to continue research activities in the utilization and adaptation of renewable energy sources for the sustainable development of the Kingdom.
The most important entities working in this field to generate solar power or research work in this field in the Kingdom are: Wind Energy
The rapid development in manufacturing and applications for the wind energy industry has increased the benefits of wind energy exploitation. The first Saudi Arabian Wind Energy Atlas was produced in 1987 by a research team from KACST and KFUPM based on the data collected from 20 meteorological stations for the period 1970-1982 (Al-Ansari et al, 1986). KACARE developed the renewable resource atlas of Saudi Arabia which provides newly collected and historical wind resource monitoring data and satellite-based modelled data for developers, researchers, government institutions and policy-makers (KACARE, 2016).
Under the “Wind Energy Resources Measurement Project”, KACARE has identified forty (40) sites throughout the Kingdom, which will serve as future wind farms. The Kingdom plans a first round wind tender of 650MW and a second round of 1.05GW. The KACARE is running the program. It would examine possible locations with a view to building a blade and turbine test facility by 2016. It added that as much as 9GW of future capacity would be installed along the Red Sea coast and the Arabian Gulf. This would primarily be used by desalination plants (McKenna, 2013).
Other Renewable Energy Sources
The use of geothermal energy system is now recognized as a cost effective standard for energy conservation. The geothermal resources encountered in Saudi Arabia are mainly of three categories: (i) low enthalpy resources represented by deep-seated aquifers that can be accessed only by deep oil wells, (ii) medium enthalpy resources (hot springs) encountered along the western and southwestern coastal parts and (iii) high enthalpy resources (Harrats) that are represented mainly by lava fields with fumarolic activity – Harrat Khaybar (Lashin et al., 2015).
The principal focus areas for future research in the fild of geothermal energy include: