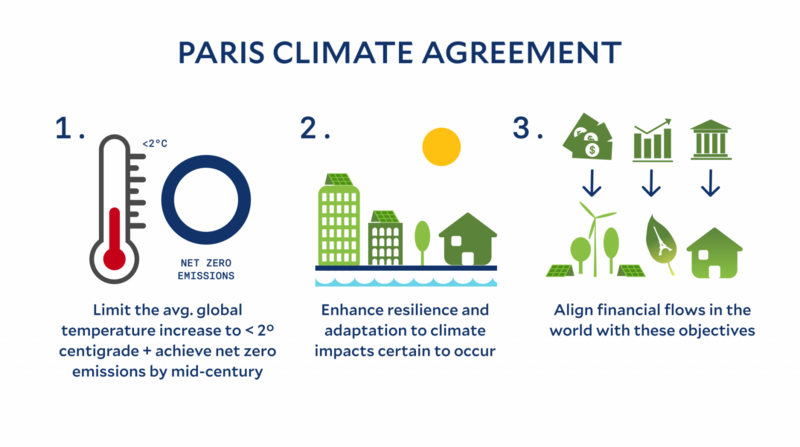 Between the period from 21 March 1994 to 4 November 2016, three key global climate change agreements have entered into force. They are the United Nations Framework Convention on Climate Change (UNFCCC) also known as the Convention, Kyoto Protocol (KP) and the Paris Agreement.  On 11 December 1990, the UN General Assembly established the Intergovernmental Negotiating Committee (INC) for a Framework Convention on Climate Change. The INC held five sessions involving more than 150 states to discuss binding commitments, targets and timetables for emissions reductions, financial mechanisms, technology transfer, and “common but differentiated” responsibilities of developed and developing countries. In May 1992, the Convention was adopted. On December 11, 1997, the Kyoto Protocol was adopted as the world’s first greenhouse gas emissions reduction treaty. In December 2011, at the seventeenth Conference of the Parties, governments commit to a new universal climate change agreement by 2015 for the period beyond 2020, leading to the launch of the Ad Hoc Working Group on the Durban Platform for Enhanced Action or ADP. This process was completed in December 2015 with the adoption of the Paris Agreement.
It is a recognized fact that the implementation of the Climate Change Convention, the Kyoto Protocol and the Paris Agreement will adversely affect sustainable development agenda of some developing countries, in particular those whose economies are largely dependent on production and export of fossil fuels.  Hence provisions were made under these three international climate change agreements as the basis for addressing the impact of implementation of response measures. The details of these provisions relating the impacts of response measures under each agreement will be discussed separately under each agreement.
The United Nations Framework Convention on Climate Change (UNFCCC) (http://unfccc.int/2860.php) as a “Rio Convention” is one of three multilateral environmental agreements that were adopted at the “Rio Earth Summit” in 1992 in Rio de Janeiro in Brazil. Its sister Conventions are the UN Convention on Biological Diversity UNCBD) and the Convention to Combat Desertification CCD) and these three are intrinsically linked.
The ultimate objective of the Convention is to stabilize greenhouse gas concentrations “at a level that would prevent dangerous anthropogenic (human induced) interference with the climate system.” It states that “such a level should be achieved within a time-frame sufficient to allow ecosystems to adapt naturally to climate change, to ensure that food production is not threatened, and to enable economic development to proceed in a sustainable manner.
The UNFCCC entered into force on 21 March 1994 and currently has near-universal membership with 197 countries that have ratified the Convention.  The countries that have ratified the UNFCCC are called Parties to the Convention. Saudi Arabia ratified UNFCCC on 28 December 1994.
The Climate Change Treaty has 26 Articles which defines amongst many other things the objectives and obligations of Parties to the UNFCCC.
Article 3 (paragraph 1) of the Convention states that Parties should act to protect the climate system based on “common but differentiated responsibilities”, and that developed country Parties should “take the lead” in addressing climate change.
Under Article 4, all Parties make general commitments to address climate change through, for example, climate change mitigation and adapting to the eventual impacts of climate change.  Article 4(7) states that:  The extent to which developing country Parties will effectively implement their commitments under the Convention will depend on the effective implementation by developed country Parties of their commitments under the Convention related to financial resources and transfer of technology and will take fully into account that economic and social development and poverty eradication are the first and overriding priorities of the developing country Parties.
Article 6 of the United Nations Framework Convention on Climate Change focuses on education, training and public awareness on climate change issues.  It stresses the need for a better understanding of climate change and its associated biophysical and socioeconomic impacts as well as advocating for a greater recognition of the role the society can and must play in adapting the adverse impacts of climate change as well as contributing to efforts to avoid emissions of greenhouse gas emissions.
In adopting the UNFCCC, Parties agreed that when addressing climate change concerns under the Convention, “Parties shall take into full consideration, in the implementation of the commitments of the Convention, the specific needs and concerns of developing country Parties arising from the impact of the implementation of response measures”.
In the implementation of the commitments in Article 4.8, Parties shall give full consideration to what actions are necessary under the Convention, including actions related to funding, insurance and the transfer of technology, to meet the specific needs and concerns of developing country Parties arising from the adverse effects of climate change and/or the impact of the implementation of response measures, especially on: 4.8(h) which refers to “countries whose economies are highly dependent on income generated from the production, processing and export, and/or on consumption of fossil fuels and associated energy-intensive products”
The Parties shall, in accordance with Article 10, take into consideration in the implementation of the commitments of the Convention, the situation of Parties, particularly developing country Parties, with economies that are vulnerable to the adverse effects of the implementation of measures to respond to climate change.  This provision applies notably to Parties with economies that are highly dependent on income generated from the production, processing and export, and/or consumption of fossil fuels and associated energy-intensive products and/or the use of fossil fuels for which such Parties have serious difficulties in switching to alternatives.