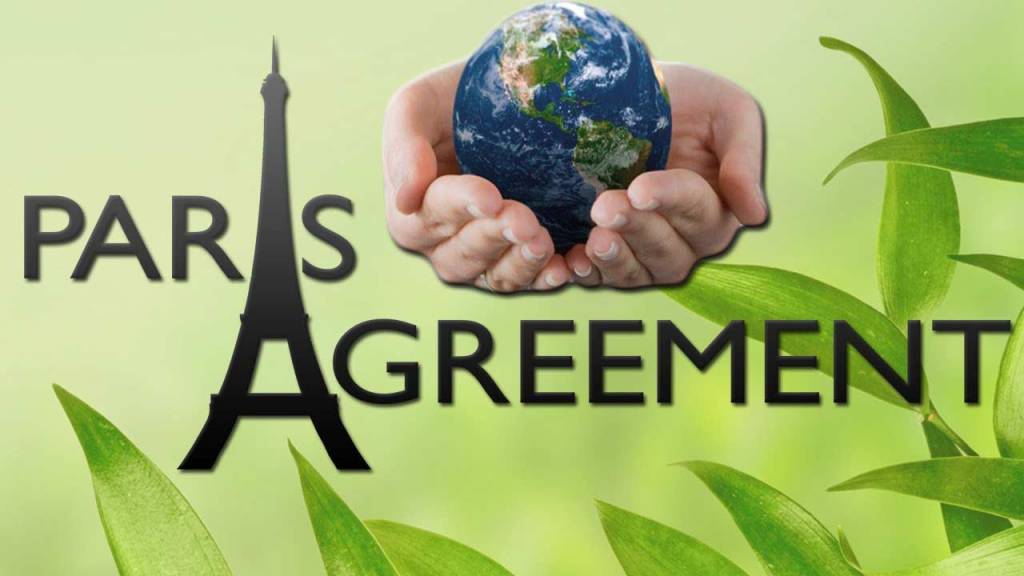 In December 2015 at COP 21 in Paris, France, 195 countries unanimously adopted an international climate agreement commonly referred to as “The Paris Agreement”. The Agreement is a hybrid approach to climate policy that includes: bottom-up elements in the form of “Intended Nationally Determined Contributions” (INDCs), which are national targets and actions that arise from domestic policies; and proposed top-down elements which provides for transparency, oversight, guidance, and coordination.
All countries (developed and developing) based on their national circumstances and respective capabilities are expected to prepare and submit their INDCs, hence dropping the “Annex I / non-Annex I” common but differentiated responsibilities (CBDR) differentiation clause of the UNFCCC and its Kyoto Protocol. The relevant decision of the Agreement calls on parties to submit their INDCs, aiming at achieving the objective of Article 2 of the Agreement of limiting global warming to well below 2OC.
The Paris Agreement also includes two innovative features to ratchet up nationally determined contributions (NDCs) to meet its overall objective overtime.  These features are the “Stocktaking” which refers to a global assessment of adequacy of NDCs to meet the temperature goal and “Progression” which refers to improving countries submitted NDCs over time.
Article 4 paragraph 15 of the Paris Agreement stipulates that Parties shall take into consideration in the implementation of this Agreement the concerns of Parties with economies most affected by the impacts of response measures, particularly developing country Parties.  This Article acknowledges that some developing countries such as Saudi Arabia with a single income source will be adversely impacted actions taken by the international community to address climate change. Article 5.15 therefore constitutes a continuation of provisions for addressing the issue of the impacts of Response Measures (RM) on developing countries with economies that are most affected by policies and measures under the Paris Agreement. The greatest significance is the obligatory language to consider RM issues under this Agreement, yet it is unclear how the dilution between Annex I (AI) and Non-Annex I (NAI) would affect the work on Response Measures. The immediate task, however, is for the Kingdom to work assiduously to operationalize this article in a manner that will allow Parties to continue examining Response Measures issues beyond 2020. Furthermore, the current decision language ensures that RM will be dealt in institutional continuity under a permanent forum.

In accordance with Article 4 paragraph 9, each Party to the Paris Agreement shall communicate a nationally determined contribution every five years in accordance with decision l/CP.21 and any relevant decisions of the Conference of the Parties serving as the meeting of the Parties to this Agreement and be informed by the outcomes of the global stocktake referred to in Article 14.
The Conference of the Parties by its decision 1/CP.19, invited all Parties to initiate or intensify domestic preparations for their INDCs towards achieving the objective of the Convention as set out in its Article 2, without prejudice to the legal nature of the contributions, in the context of adopting a protocol, another legal instrument or an agreed outcome with legal force under the Convention applicable to all Parties.  It also invited Parties to report in a manner that facilitates the clarity, transparency and understanding of the INDC. It also invited all Parties to consider communicating their undertakings in adaptation planning or consider including an adaptation component in their (INDCs).

In order to facilitate clarity, transparency and understanding, the COP decided that the information to be provided in INDCs may include, as appropriate, inter alia, quantifiable information on the reference point (including, as appropriate, a base year), time frames and/or periods for implementation, scope and coverage, planning processes, assumptions and methodological approaches including those for estimating and accounting for anthropogenic greenhouse gas emissions and, as appropriate, removals, and how the Party considers that its intended nationally determined contribution is fair and ambitious, in light of its national circumstances, and how it contributes towards achieving the objective of the Convention as set out in its Article 2;
The Kingdom of Saudi Arabia through the Designated National Authority (DNA) initiated a consultative and bottom up process to collect relevant data and prepared its INDCs in close collaboration with all relevant national agencies, institutions and other stakeholders.  On 10th November 2015, the Kingdom of Saudi Arabia submitted its INDC to the UNFCCC secretariat.

The Kingdom’s submission outlined a set of bottom up actions based essentially on adaptation which is designed to achieve mitigation co-benefits that could lead to annual avoidance of GHG emissions of up 130 million tons of CO2-equivalent.  Within the framework of the Paris Agreement, the Kingdom will make efforts to meet its contributions while pursuing economic diversification within the context of sustainable development and the exploitation of its indigenous resources to the benefit of its people.  The Arabic version and; English version of the KSA’s INDC are available at the UNFCCC website.

To promote an increased awareness of the contents of the Kingdom’s INDC, a brochure has been prepared by the DNA to that effect INDC Brochure in Arabic & English.

DNA is also charged with the responsibility of developing a Kingdom wide measurement, reporting and verification (MRV) system that will be deployed to track progress towards achieving INDC actions and projects and any modifications thereof.  Work has already commenced on the development of such a domestic MRV system with all relevant national stakeholders.