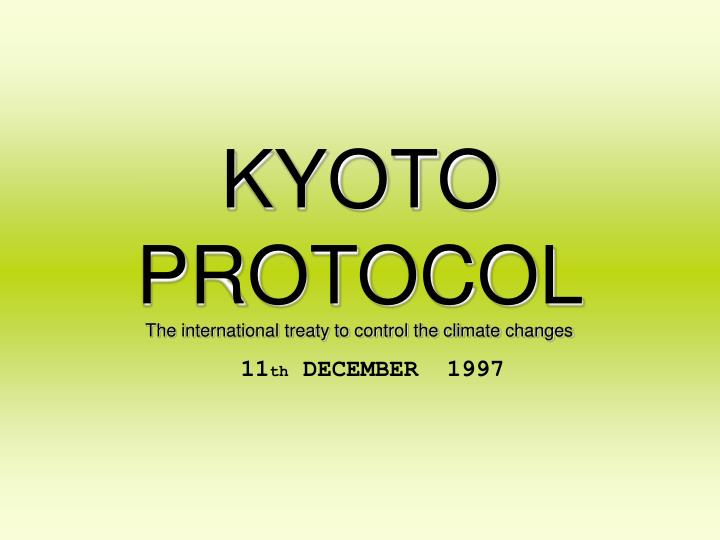 Kyoto Protocol is an international agreement adopted in the Japanese City of Kyoto on 11 December 1997 as an extension to the United Nations Framework Convention on Climate Change, to reduce global greenhouse gas emissions from industrialized countries.  Currently there are 192 parties to the Protocol.  The Protocol is based on the principle of common but differentiated responsibilities, and puts the obligation to reduce current emissions on developed countries on the basis that they are historically responsible for the current levels of greenhouse gases in the atmosphere. Developing countries did not have any emission reduction commitments, since their priorities are economic growth and poverty reduction.  The Kingdom of Saudi Arabia ratified the Kyoto Protocol on 31 January 2005.

The Kyoto Protocol entered into force on 16 February 2005
The Protocol’s first commitment period started in 2008 and ended in 2012.  While individual nations have different targets, the overall reduction in greenhouse gases from 1990 levels is 5.2 percent. Rather than setting a single year as the deadline, the treaty allows countries to average their emissions over a five-year period (2008-2012), to allow for variations in economic growth, etc. The six greenhouse gases covered by the Treaty are , CO2 – Carbon dioxide, CH4 – Methane, N2O – Nitrous oxide, PFCs – Perfluorocarbons, HFCs – Hydrofluorocarbons, and SF6 – Sulphur hexafluoride.

A second commitment period was agreed to on 12 December 2012, known as the Doha Amendment to the Protocol, in which 37 countries have binding targets namely: Australia, the European Union (and its 28 member states), Belarus, Iceland, Kazakhstan, Liechtenstein, Norway, Switzerland, and Ukraine.  As of 21 September 2017, 83 states have ratified the Doha Amendment, while entry into force requires the acceptances of 144 states.
The treaty also has a number of “flexibility provisions” to allow developed countries to find the lowest cost options to meet their targets. These include: investing in activities which store carbon; emissions banking and trading; and joint implementation of projects with developing countries.

Under the provisions Article 2.3 of the Kyoto Protocol, Parties included in Annex I shall strive to implement policies and measures …… in such a way as to minimize adverse effects, including the adverse effects of climate change, effects on international trade, and social, environmental and economic impacts on other Parties, especially developing country Parties and in particular those identified in Article 4, paragraphs 8 and 9, of the Convention, taking into account Article 3 of the Convention.  In this context, response measures are mitigation actions taken or initiated by developed country Parties but with the impacts flowing to developing country Parties, in particular fossil fuel dependent developing countries. The Conference of the Parties serving as the meeting of the Parties to this Protocol may take further action, as appropriate, to promote the implementation of the provisions of this paragraph.

Each Party included in Annex I shall strive to implement the commitments mentioned in paragraph 1 Article 3 in such a way as to minimize adverse social, environmental and economic impacts on developing country Parties, particularly those identified in Article 4, paragraphs 8 and 9, of the Convention. In line with relevant decisions of the Conference of the Parties on the implementation of those paragraphs, the Conference of the Parties serving as the meeting of the Parties to this Protocol shall, at its first session, consider what actions are necessary to minimize the adverse effects of climate change and/or the impacts of response measures on Parties referred to in those paragraphs. Among the issues to be considered shall be the establishment of funding, insurance and transfer of technology.