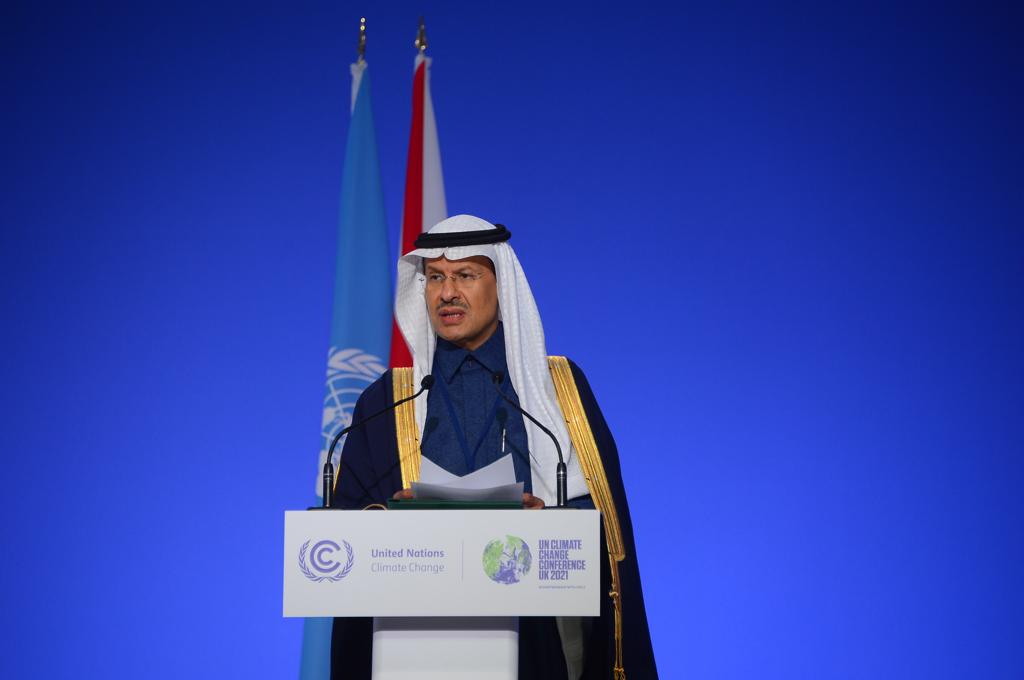 The Kingdom of Saudi Arabia reiterated the importance of renewing efforts to implement the United Nations Framework Convention on Climate Change (UNFCCC) and the Paris Agreement and keeping in mind the principle of shared, yet distinct, responsibilities among different countries, as highlighted in the Kingdom’s address at COP26, delivered by HRH Prince Abdulaziz bin Salman, Minister of Energy.


“The Kingdom of Saudi Arabia,” HRH said, “believes that we all have to renew our efforts to implement the United Nations Framework Convention on Climate Change (UNFCCC) and the Paris Agreement, and that we all should keep in mind the principle of shared, yet distinct, responsibilities among different countries. Equally, we should all be conscious of the special circumstances of the Less Developed Countries, and we should work together to help these countries mitigate the impact of climate change policies, without compromising their sustainable development.”


“The Kingdom,” he added, “has recently launched the Saudi Green Initiative (SGI) and the Middle East Green Initiative (MGI), which aim to reduce carbon emissions in the Middle East by more than 10% of the current global contributions. Over the past decade, recognizing the increasing importance of prioritizing our climate change ambitions, the Kingdom has revised its Nationally Determined Contribution (NDC), pledging to reduce emissions by 278 million tons per year by 2030, more than double the previous goal set in 2015. It has also announced its ambition to achieve net zero by 2060, within the Circular Carbon Economy (CCE) framework, and in line with the Kingdom’s developmental and diversification plans, and the dynamic baseline of its NDC, providing that the necessary technologies for this approach are mature and available. This will help ensure that the Kingdom maintains and enhances its leadership role in promoting the security and stability of energy markets.”


HRH also said that “the Kingdom has announced its intention to join the Global Methane Pledge, which aims at limiting methane emissions by 30% compared with 2020 levels. To realize these ambitious plans, the details of more than 53 Saudi initiatives have been published, with more than 185 billion dollars of investment. These initiatives include increasing the share of renewables in the power mix to 50%, launching the Saudi Energy Efficiency Program, establishing one of the largest hydrogen hubs in the world in NEOM as the Kingdom aspires to produce 4 million tons of green and blue hydrogen annually, and setting up the largest CCUS complex, with a capacity of 44 million tons per year by 2035. In addition, the Kingdom is establishing a 10 billion dollar fund for deploying CCE technologies in the Middle East, Africa and developing countries. The Kingdom has also launched a global initiative to provide clean cooking solutions to more than 750 million people. The total investment in these two initiatives is around 11 billion dollars, of which the Kingdom will finance 15%. Saudi Arabia will work with different countries and regional and international funds to seek ways to finance and implement these initiatives.”

In addition, HRH Prince Abdulaziz pointed out that the Kingdom announced “a number of regional and international initiatives, such as a regional center for early warning of storms, and a regional center for sustainable development of fisheries. Both will play a crucial role in building the infrastructure needed to protect the environment, reduce emissions and promote regional coordination. It has also launched one of the largest afforestation projects in the world for planting trees in the Kingdom and the Middle East to remove carbon.”

“The fact that climate change is a universal phenomenon,” HRH affirmed, “requires an international, shared and effective response. That response should address three main pillars: energy security, economic development for the benefit of humanity, and climate change. All of these pillars must be addressed in a holistic manner, without compromising one for the sake of another. It is imperative that we recognize the diversity of climate solutions, and the importance of emissions reduction as stipulated in the Paris Agreement, without any bias towards or against any particular source of energy.”​